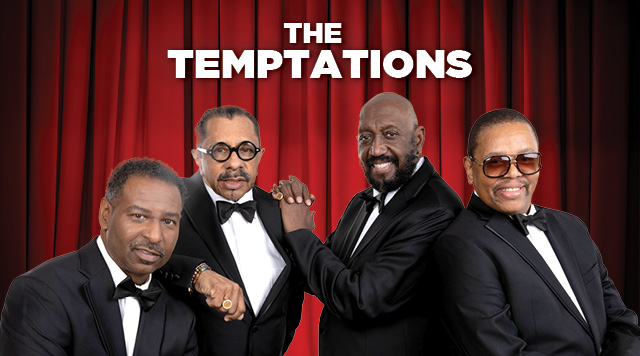 What began in Detroit when a remarkable combination of soulful voices, was the genesis of an epic journey that introduced multiple superstars to the world and produced some of the greatest music of our era.

When the legendary “Classic Five,” (Otis Williams, Melvin Franklin, Eddie Kendricks, Paul Williams and David Ruffin) released the single, The Way You Do The Things You Do in 1964, it marked the beginning of a multitude of award-winning and chart-topping songs and albums that would be embraced by popular music audiences globally. It was on March 6, 1965 that their first million copy bestselling single, My Girl hit #1 on Billboard’s Pop chart.

The Temptations have produced 53 Billboard Hot 100 Hit singles, including #1 Pop singles: I Can’t Get Next To You, Just My Imagination and Papa Was a Rollin’ Stone.

Additionally, they released 43 Top 10 R&B hit singles, 14 of which were #1 R&B hits, including timeless classics such as Ain’t Too Proud to Beg, Beauty Is Only Skin Deep, I Wish It Would Rain, and songs influenced by their funk/psychedelic soul sound including Happy People, and Shakey Ground. The group also has 16 #1 R&B Albums.

Tickets are available at the Delta Downs Gift Shop or Ticketmaster.com.
Cost:
Tickets from $75 plus taxes and convenience fees

Must be 21 years or older to attend. All performances subject to change or cancellation without prior notice. Other restrictions apply. Visit B Connected for details. © 2020 BOYD GAMING CORPORATION®